Farrah Fawcett received both Emmy and Golden Globe Award nominations for her starring roles in the miniseries Small Sacrifices, playing Diane Downs, and in the made-for-television movie THE BURNING BED, portraying battered wife Francine Hughes. THE BURNING BED was further distinguished as the first television movie to offer victims of domestic abuse help through a nationwide 800 number.

Fawcett has also been honored with a Golden Globe nomination for her role as Barbara Hutton in the miniseries Poor Little Rich Girl. She won the Cable ACE Award for Best Actress for her portrayal of Margaret Bourke-White in the televised film Double Exposure: The Margaret Bourke-White Story.

Excerpt from IMDB.com… A native of Texas, she is the daughter of James Fawcett and Pauline Evans. She was a natural athlete, something that her father encouraged, and she attended a high school with a strong arts program.

She attended University of Texas in Austin, graduating with a degree in Microbiology, but only wanted to be an actress. Winning a campus beauty contest got her noticed by an agent, who encouraged her to pursue acting. Fawcett didn't graduate instead she moved to Los Angeles and her healthy, all-American blond beauty was immediately noticed.

She quickly got roles in various television commercials for such products as Ultra-Brite toothpaste, and Wella Balsam shampoo, and also made appearances in some TV series. In 1970, she won her first major role in the film adaptation of the Gore Vidal novel Myra Breckinridge (1970). In 1973, she and Lee Majors married, and the following year, she won a recurring role in the crime series "Harry O" (1973). She had her first taste of major success when she won a supporting role in the science fiction film Logan's Run (1976).

She came to the attention to the highly successful producer Aaron Spelling. That won her a role in the TV series Charlie's Angels (1976). She played a private investigator who works for a wealthy and mysterious businessman, along with two other glamorous female detectives, played by Kate Jackson and Jaclyn Smith. The show immediately became the most popular series on television, earning record ratings and a huge audience. All three actresses became very popular, but Farrah became by far the best known. She was America's sweetheart, and found herself on every celebrity magazine and pursued by photographers and fans. While she enjoyed the success and got along well with her co-stars (both of whom were also of Southern origin), she found the material lightweight. Also, the long hours she worked were beginning to take a toll on her marriage to Majors, who found himself eclipsed by her popularity. So the following year, when the show was at its peak, she left to pursue a movie career.

The move drew a negative reaction from many fans. As a result of that and some poor script choices, her career briefly hit a slow spot. In addition, she and Majors separated in 1979. She had starring roles in Somebody Killed Her Husband (1978), Sunburn (1979), and Saturn 3 (1980), but all three failed financially. She appeared in the Burt Reynolds chase comedy The Cannonball Run (1981), which was successful financially in spite of bad reviews, but her career benefited very little.

Fawcett made a major comeback when she starred in the searing story of a battered wife in The Burning Bed (1984) (TV), based on a true story. It garnered a very large audience, and critics gave her the best reviews she had ever received for her heartfelt performance. Fawcett was nominated for both an Emmy and Golden Globe and also became involved in helping organizations for battered women.

Fawcett then stared in Extremities (1986). Fawcett scored success again in Small Sacrifices (1989) (TV), again based on a true crime. Portraying an unhappy woman who is so obsessed with the man she loves that she shoots her children to make herself available and disguises it as a carjacking, Farrah again won rave reviews and helped draw a large audience, and was nominated for an Emmy again. Shortly afterwards, she and Ryan O'Neal co-starred in Good Sports (1991), playing a couple who co-star in a sports news program, but O'Neil's performance was lambasted and only 9 episodes were aired. In 1995, she surprised her fans by posing for "Playboy" at the age of 48 ad it became the magazine's best-selling issue of that decade. Fawcett received very negative publicity when she appeared on Late Show with David Letterman (1993) however, she made another comeback in The Apostle (1997), playing the neglected wife of a Pentecostal preacher, played by Robert Duvall. Both stars were praised and the film became a surprise hit.

In 2004, she received her third Emmy nomination for her performance in The Guardian (2003), in early 2006, she was devastated when her beloved mother (Pauline Fawcett) passed away. Later that year, she was diagnosed with cancer. On February 2, 2007, her 60th birthday, it was announced that she was cancer free however on June 25, 2009 Farrah (62) lost her battle with cancer.

On May 23rd, 2019 This Is Farrah Fawcett, a two-hour ABC News documentary about the life of the late actress aired and took the nights top viewing spot. It averaged 5.78 million viewers and a 0.7 rating among adults 18-49, best on the broadcast networks in both measures. A re-edited version of her Farrah's Story that originally aired in 2006 with some new interviews and multiple clips & voice overs by Fawcett herself from her PlayBoy ALL OF ME special. 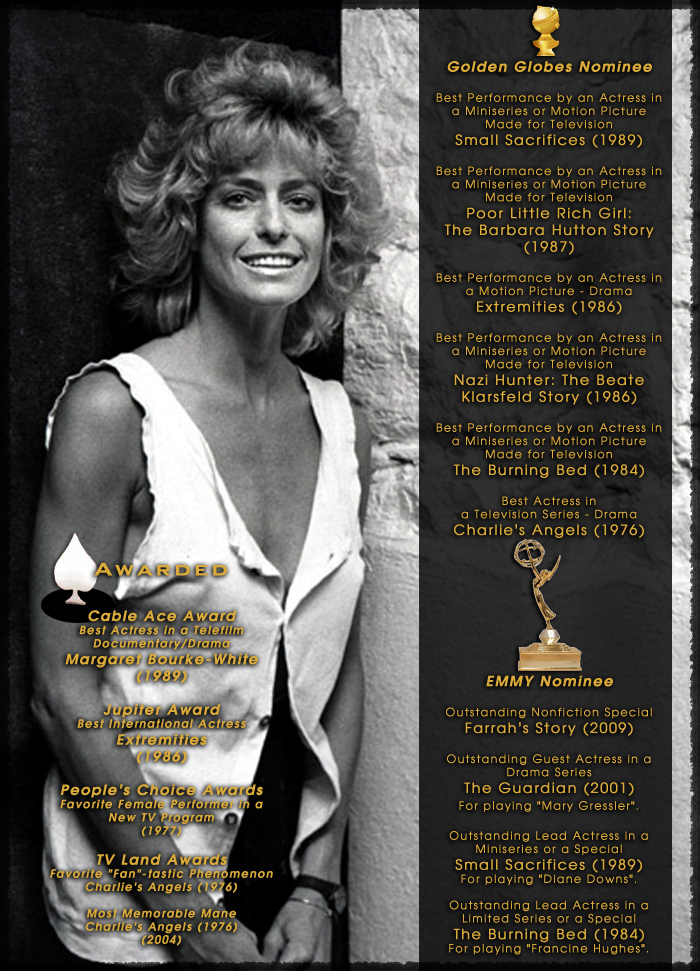