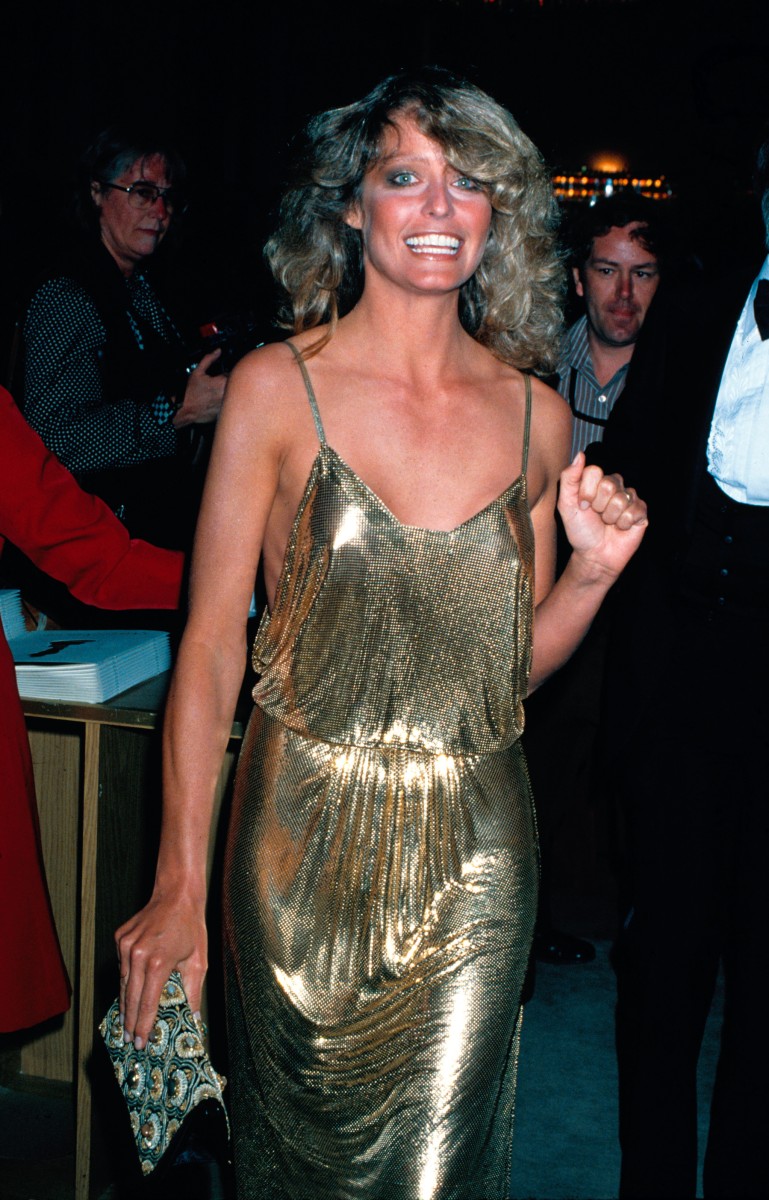 Fawcett did not have an easy transition into mainstream theatrical releases. Her first film was Love is a Funny Thing in 1969. Later Farrah was to have a co-star billing with Chevy Chase playing the part Goldie Hawn played in Foul Play but because of the legal battle after exiting Charlie's Angels Farrah was out. Farrah's first three films after leaving Angels: Somebody Killed Her Husband, SUNBURN and Saturn 3, did not help her with critics or audiences. One critic wrote that Somebody Killed Her Husband was Somebody Killed Her Career, SunBurn further scorched it and Saturn 3 shot it out into space! Fawcett later commented to Johnny Carson that Saturn 3 was originally titled The Helper and the script was very different before they started shooting. "I don't know what happened," says Fawcett adding, "Originally it was about a robot who falls in love because he feels what the man who built him felt." Fawcett on acting and image once said, “I don't think an actor ever wants to establish an image. That certainly hurt me, and yet that is also what made me successful and eventually able to do more challenging roles.”  It was not until a string of television films boosted her as an actor with grit and capability that Fawcett found better work in films such as EXTREMITIES,  See You in the Morning and The Apostle. Fawcett did go on to become a four-time Emmy Award nominee and six-time Golden Globe Award nominee.

Farrah in Stephen Burrow's Golden Dress (1978) at the 52nd Oscars Awards touted as one of the 20 Most Memorable Oscars Looks of All Time.

In March 2010, the Academy of Motion Picture Arts and Sciences upset family and friends of Fawcett when she was excluded from the "In Memoriam" montage at the 82nd Academy Awards ceremony. The inclusion of Michael Jackson in the montage, someone who was not primarily known for his film roles, only added to the controversy. Friends and colleagues of Fawcett, including Tatum O'Neal, Jane Fonda and film critic Roger Ebert, publicly expressed their outrage at the oversight. 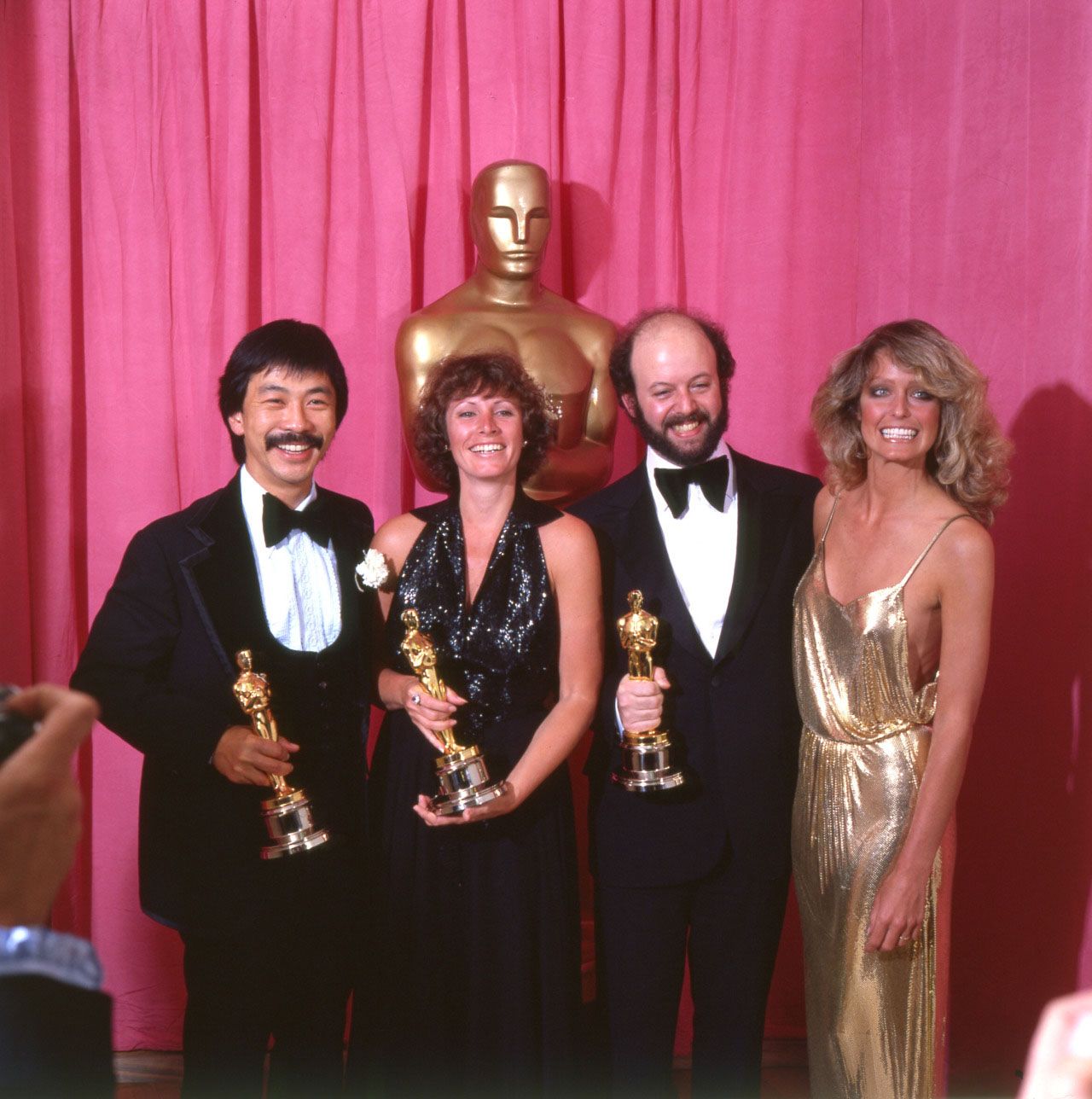 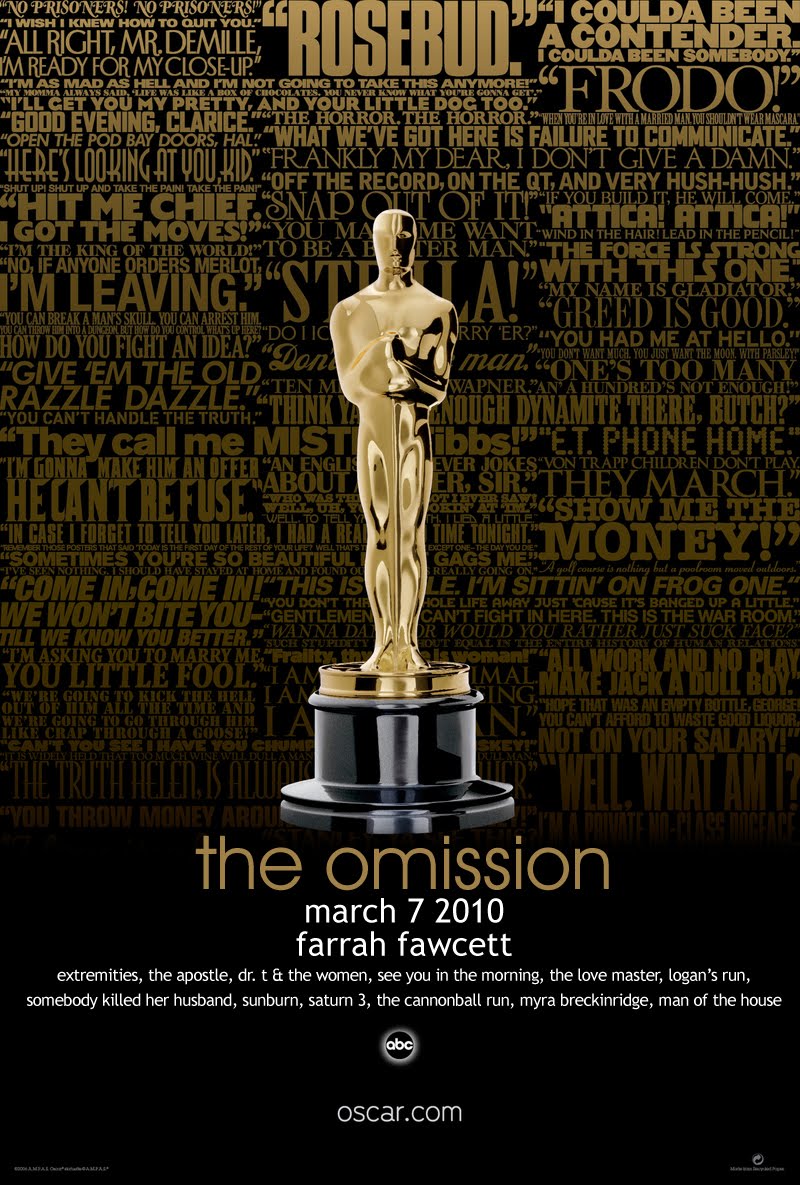 AMPAS executive director Bruce Davis noted that Fawcett had been recognized for her "remarkable television work" at the 61st Primetime Emmy Awards in September 2009. On the exclusion, he said: "There's nothing you can say to people, particularly to family members, within a day or two of the show that helps at all. They tend to be surprised and hurt, and we understand that and we're sorry for it." 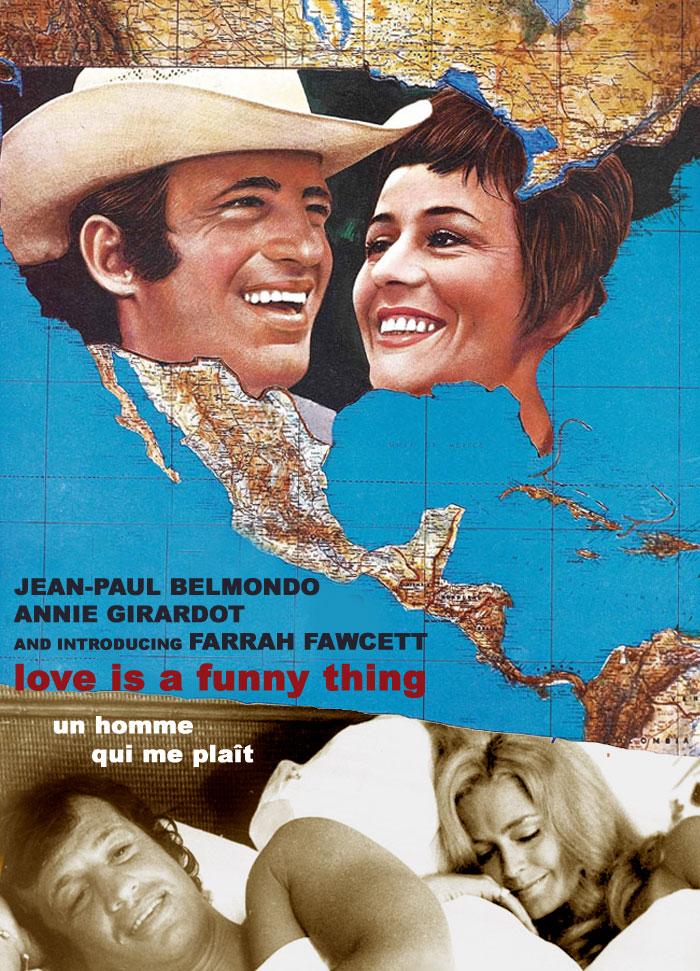 Love is a Funny Thing

A composer (Jean-Paul Belmondo) and a French film star (Annie Girardot), each married to another, fall in love in America and have an affair. With Farrah Fawcett as Patricia. 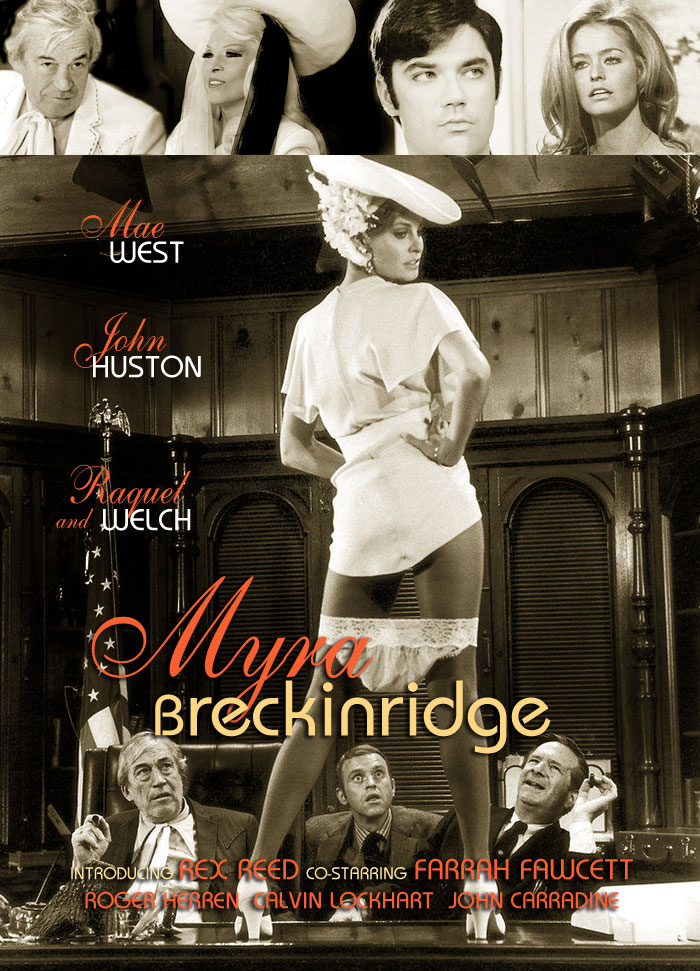 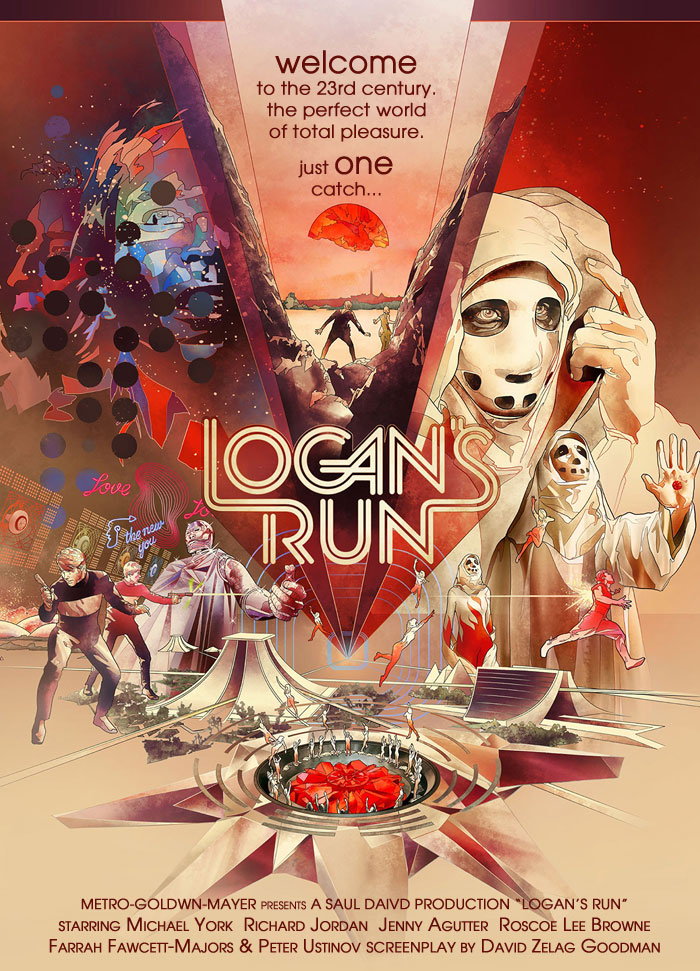 In the year 2274, young residents enjoy an idyllic, hedonistic lifestyle with a general belief that when each person turns 30, they are reincarnated. Those who flee become "runners" and flee to a hidden sanctuary. When law enforcement officer Logan (Michael York) goes undercover to locate the refuge, he winds up instead trying to initiate a revolution with runner Jessica (Jenny Agutter) with Farrah Fawcett as Holly and Richard Jordan as Francis. 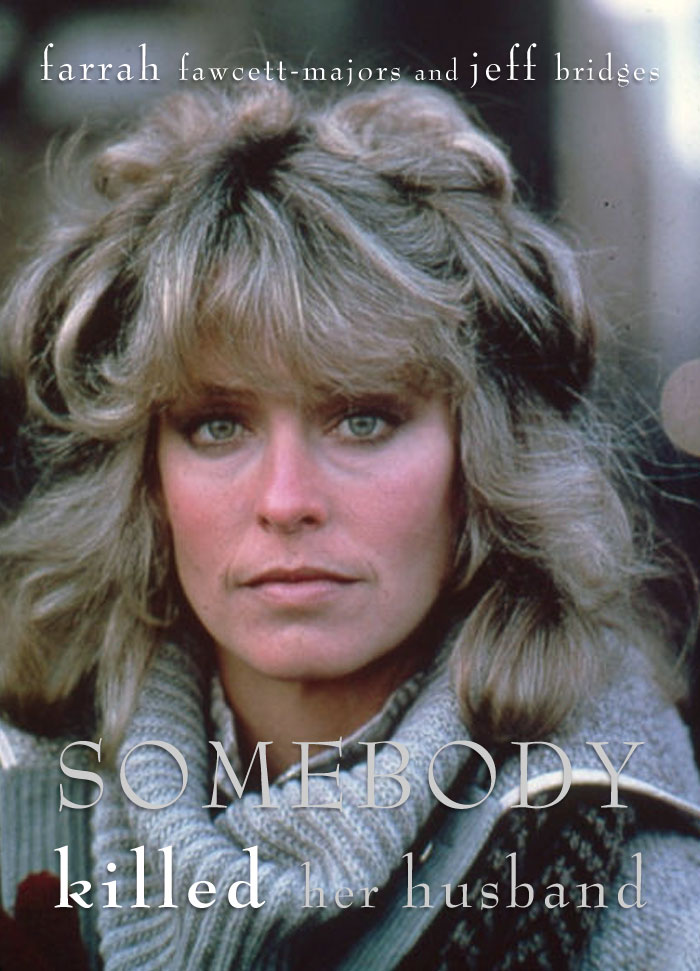 Somebody Killed Her Husband

A Macy's toy clerk (Jeff Bridges) and his Manhattan lover (Farrah Fawcett-Majors) find her husband with a kitchen knife in his back. 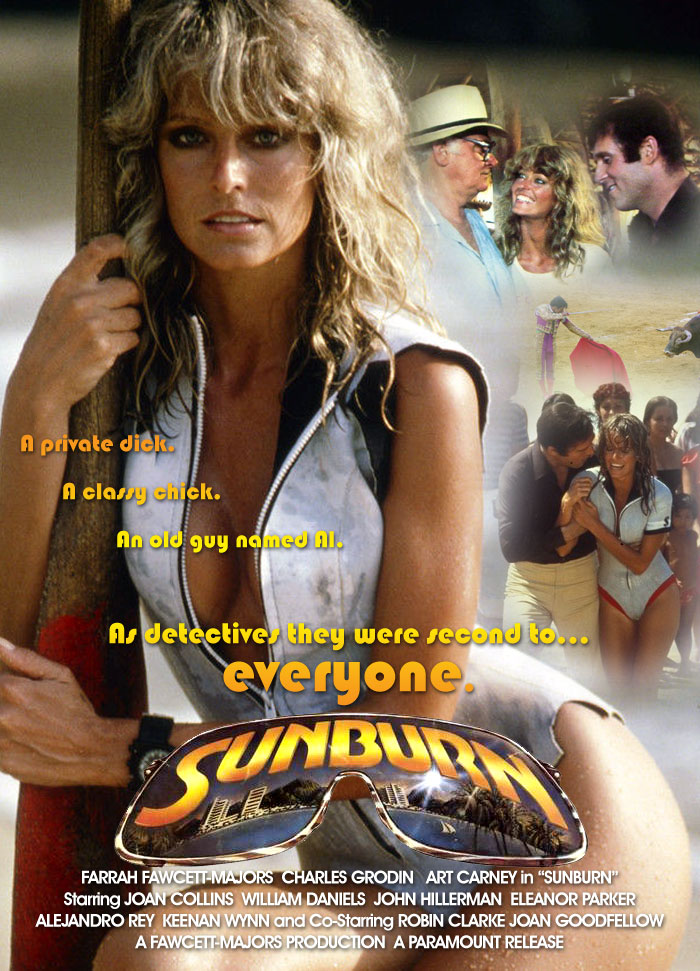 Dekker, an insurance investigator, is hired to probe a $5 million claim on a wealthy industrialist killed in Acapulco. He hires Ellie, a naïve but beautiful model to pose as his wife and soon discovers a web of international intrigue. 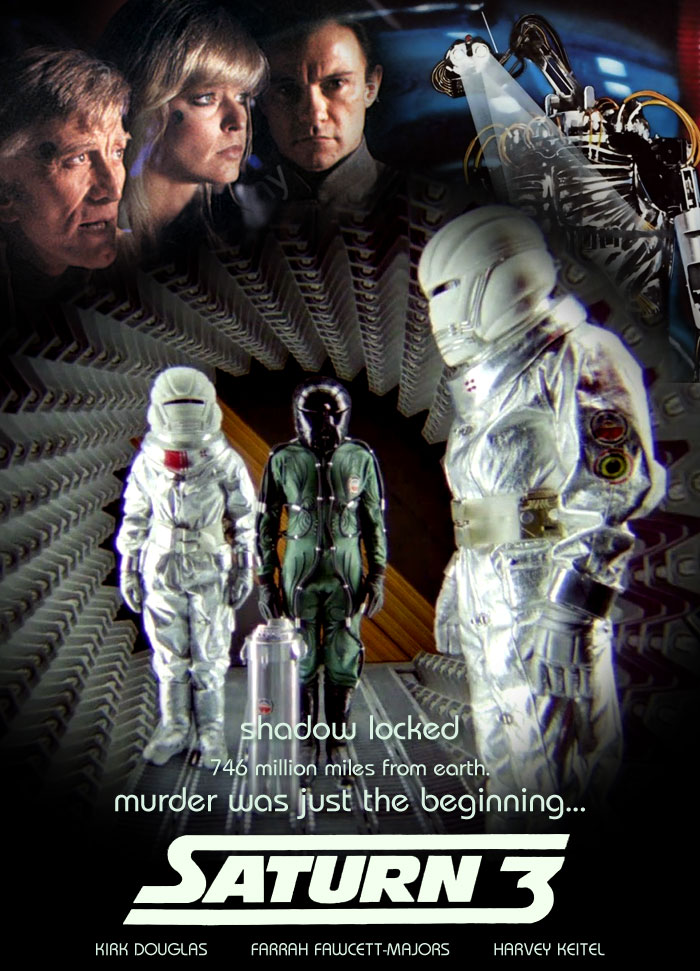 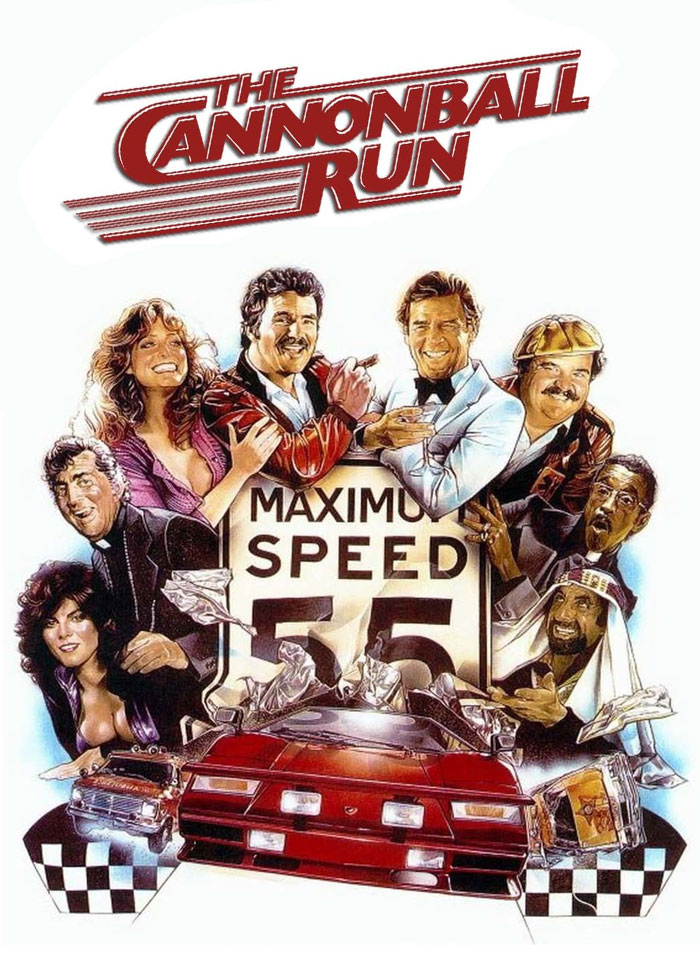 From Widpedia The Cannonball Run is a 1981 comedy film starring Burt Reynolds, Roger Moore, Dom DeLuise and Farrah Fawcett, and was directed by Hal Needham. It was produced by Hong Kong's Golden Harvest films. There were two sequels, 1984's Cannonball Run II and 1989's Speed Zone! The latter was also known as Cannonball Fever.

The Box Office
The film earned $72,179,579. According to the Box Office Mojo web site, Cannonball Run was the sixth-highest grossing film of 1981, behind Raiders of the Lost Ark, On Golden Pond, Superman II, Arthur and Stripes. 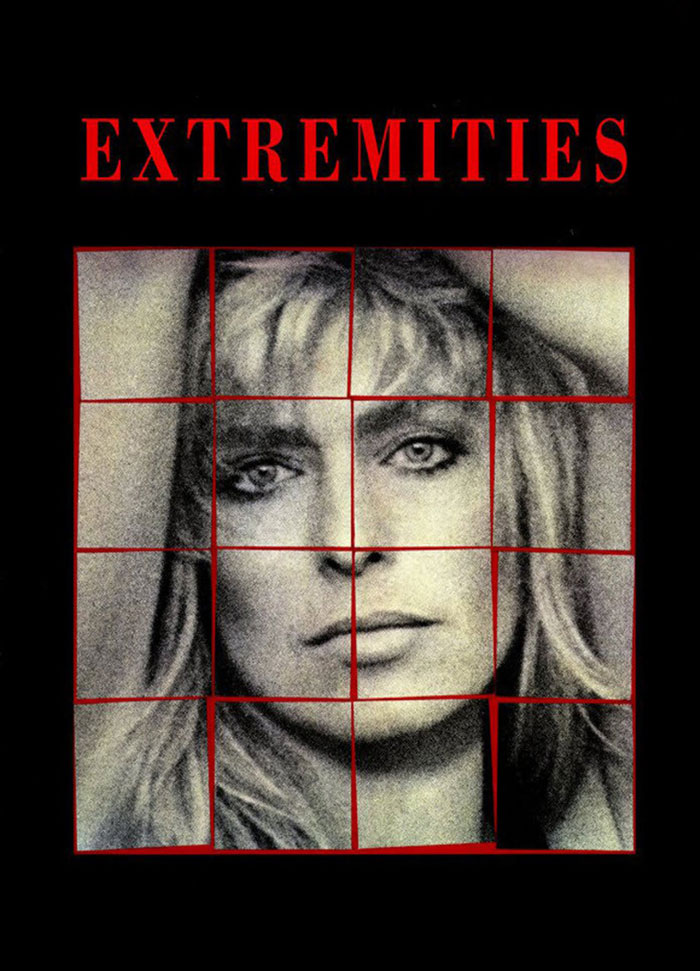 After narrowly escaping an attempted rape, Marjorie (Fawcett) is haunted by the fact that her attacker (James Russo) knows where she lives. But when he appears on her doorstep and subjects her to a non-stop barrage of physical and mental assaults, Marjorie manages to disarm and capture him.

Filled with fear and hostility, she conspires with her roommates (Diana Scarwid and Alfre Woodard) to take the law into their own hands. But as her rage consumes her, Marjorie shocks her friends with a proposal that challenges the perilously thin line between justice and vengeance.

It was adapted from the successful, yet controversial, 1982 Broadway play by William Mastrosimone. Both Fawcett and Russo appeared in the play 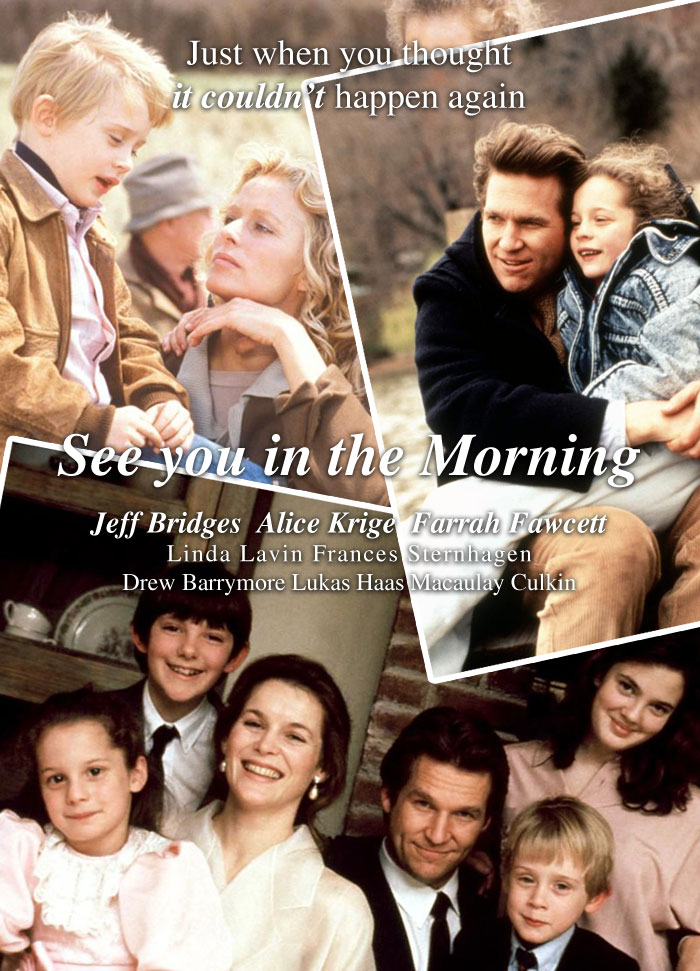 See You In The Morning

Three years after his divorce from his (Jeff Bridges) model-wife (Farrah Fawcett) is the psychologist Larry Livingstone ready for a new commitment. He falls in love with the young widow Beth (Alice Krige) who has two children. But Beth and the children are still in mourning over their dead husband and father and Larry finds it a bit difficult to penetrate their reservations. Larry himself has to deal with his ex-wife and his love for his own two kids. Slowly both Beth and the children realise that they have to go on with their lives and that they have been giving a second chance.

Man of the House

From Wikipedia: Man of the House is a 1995 American comedy film starring Chevy Chase, Farrah Fawcett and Jonathan Taylor Thomas. The film is about a boy (Thomas) who must come to terms with his potential stepfather (Chase), a well-meaning lawyer who is unknowingly the subject of a manhunt by relatives of a man he helped land in prison. It was shot in Los Angeles and Vancouver. 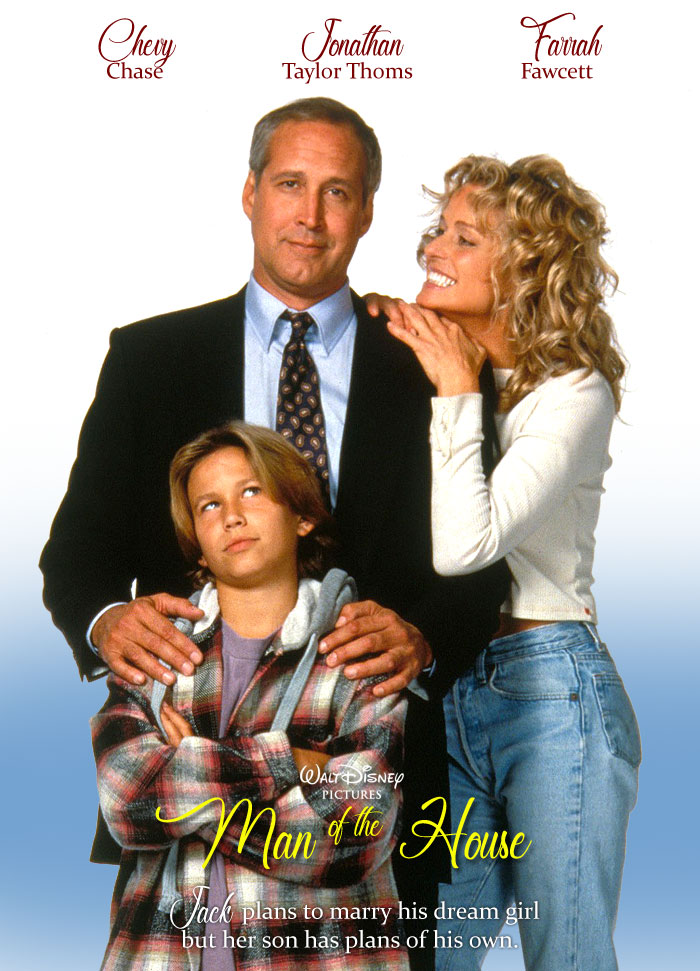 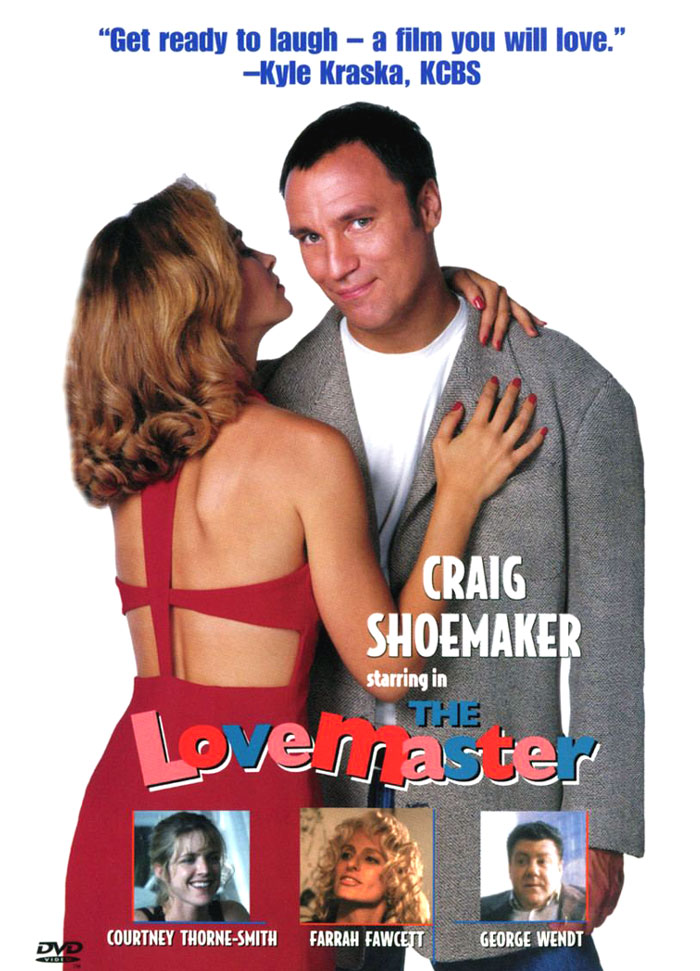 A stand-up comic (Craig Shoemaker) bemoans his lack of success with women (Farrah Fawcett, Courtney Thorne-Smith) to a therapist.

Shoemaker wrote, produced and starred in the cult classic Totally Baked and his movie The LoveMaster, won the Los Angeles Independent Film Festival.

As an author he has a best selling book, LoveMaster'd A Digital Journey to Love & Happiness, is critically acclaimed by the likes of Whoopi Goldberg and Dr. Drew Pinsky, inspiring readers worldwide in managing through personal difficulties.

In 2003, he founded LaughterHeals.org, a nonprofit group dedicated to using laughter as a healing modality.

Farrah Fawcett, per Robert Duvall, is one of America's most underrated Actor's. Critics and the public agreed because her performance in "The Apostle" is noted as one of her best. Industry insiders wanted Fawcett nominated for an Oscar for her performance.

Written, directed, and personally financed by Robert Duvall, The Apostle was the culmination of a 14-year effort on the part of its creator, who also stars as the dynamic, God-fearing Texas preacher Euliss "Sonny" Dewey. Vibrantly authentic with its use of real gospel preachers and extras carefully selected from parishes of the deep South, the film treats its complicated characters with the kind of compassion and moral complexity mainstream Hollywood wouldn't dare muster. This is especially true in the case of Sonny, who responds to his wife's infidelity with a crime of passion that sends him on a new and uncharted quest for redemption. Under the assumed identity of "The Apostle E.F.," he settles in a tiny Louisiana town to revive an old church, where he undergoes a transformation of spirit and purpose that enlivens his community. But will the law catch up to him? Does he deserve to be punished? Fueled by Duvall's powerhouse performance, The Apostle refuses to praise or condemn its fascinating central character, leaving the proper degree of forgiveness up to the viewer. Further graced with superb performances by Farrah Fawcett, Miranda Richardson, and Billy Bob Thornton, the film is clearly Duvall's labor of love. The Collector's Edition DVD features a full-length commentary by Duvall and The Journey of the Apostle, a documentary featurette about the making of the film. --Jeff Shannon

From The New Yorker

Produced, written, and directed by its star, Robert Duvall, this film addresses without condescension or glibness a subject-religious conviction-that Hollywood generally caricatures. Duvall plays Sonny, a charismatic Pentecostal preacher who dresses in white three-piece suits and has so antagonized his wife (Farrah Fawcett) with his philandering that she's taken up with a younger minister and wrested control of his church. After bashing his rival with a baseball bat, Sonny leaves Texas and shows up in Bayou Boutte, Louisiana, where he rebuilds a church and infuses his mostly black congregants with spiritual ardor before his past catches up with him. Duvall's performance is so passionate, so energized, that it's almost eerie: is Sonny acting him or is he acting Sonny? The supporting players include John Beasley, June Carter Cash, Miranda Richardson, and Billy Bob Thornton. -Daphne Merkin Copyright © 2006 The New Yorker

He spent his life trying to be a good man. But beneath the virtue and the conviction that made him a successful preacher lie true human emotions-lust desire and rage. A preacher whose honest conviction won him the respect of a town until one day he commits a crime of passion. Studio: Uni Dist Corp. (mca) 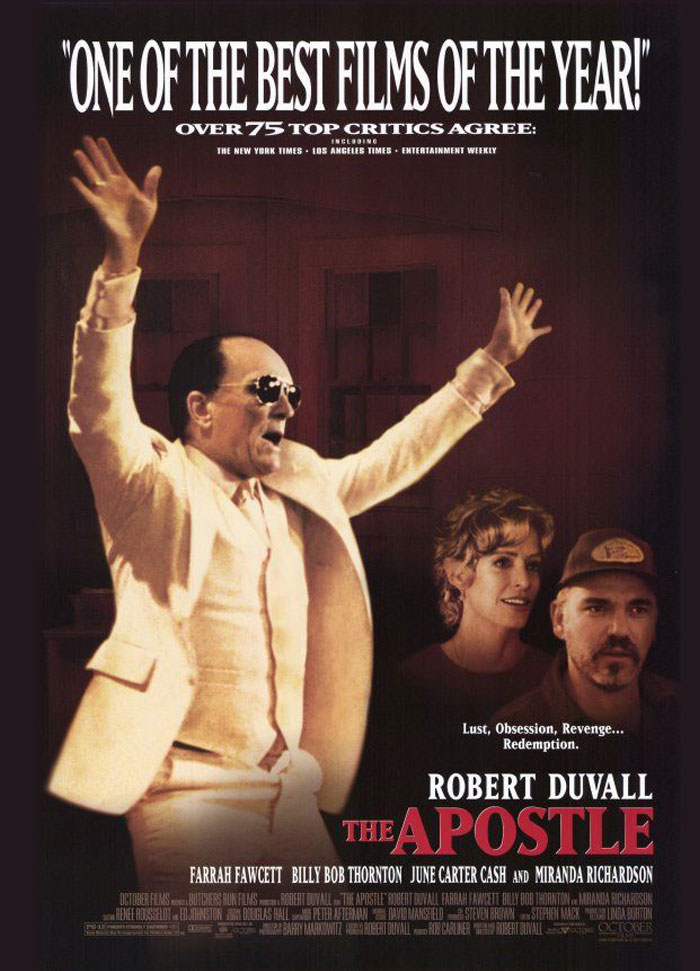 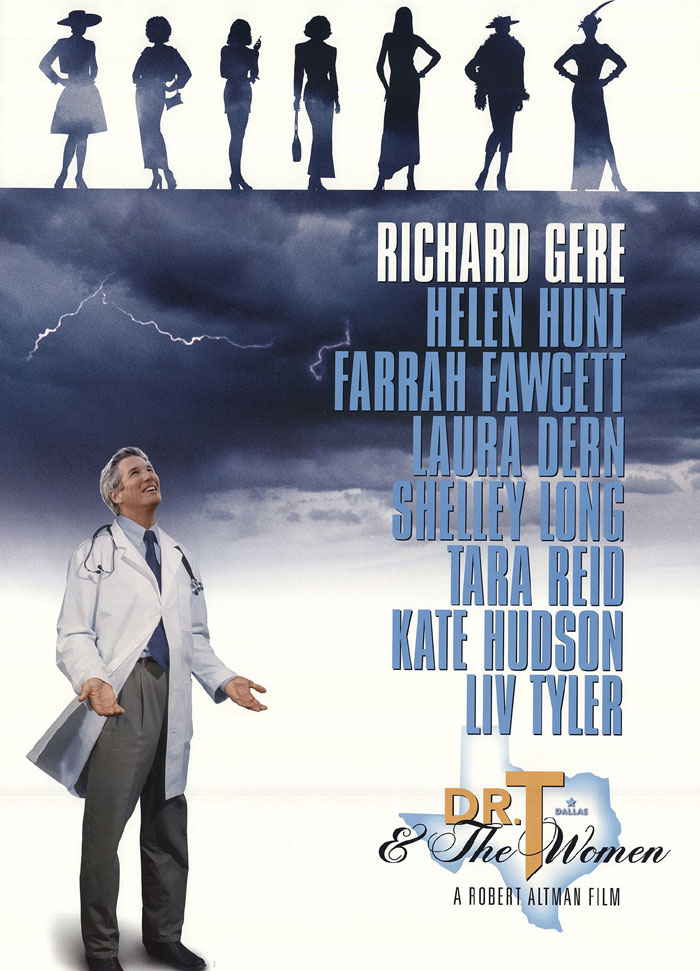 Dr. Sullivan Travis is a man at the top of his game, a rich and successful Dallas gynecologist whose "religion" is women. Dr. T. worships women. In his immediate family and in his office, they surround him. He is loving and giving to each and every one at all times -- he is their savior. And sure enough, as in the story of Job, one day a higher force decides to test his faith. Once a man in complete control of his universe, Dr. T. now finds himself buffeted by chaos and confusion.
Release date: October 13, 2000 (USA)
Director: Robert Altman
Budget: 12 million USD
Costume design: Dona Granata 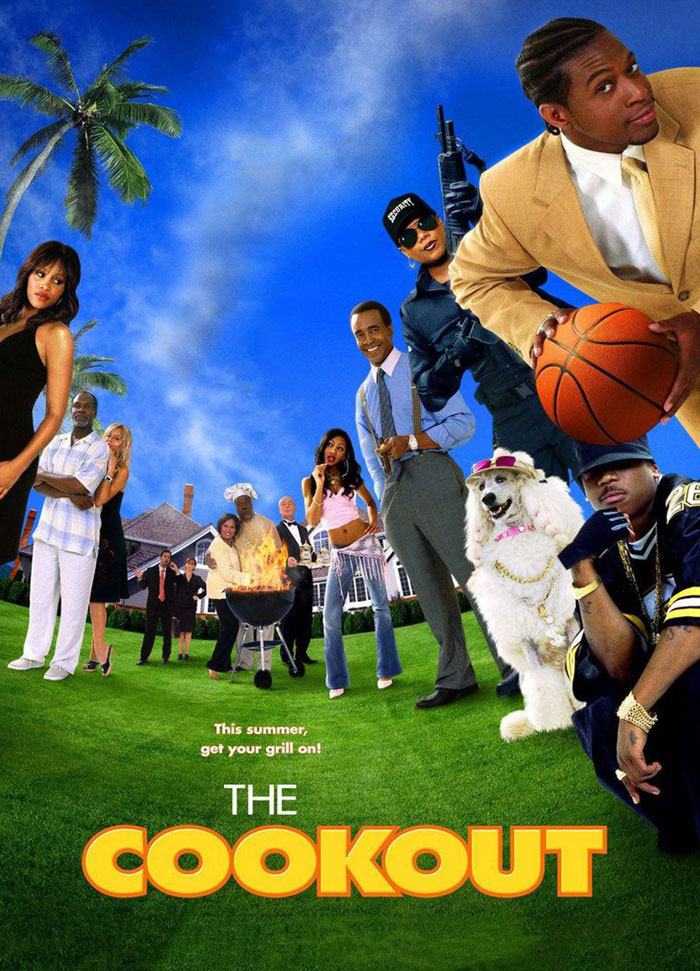 College basketball player Todd Anderson (Storm P) signs a $30 million deal with the New Jersey Nets and promptly moves to a wealthy suburb. His mother (Jenifer Lewis), however, insists that Todd remain connected to his humbler roots. So Todd decides to hold a good old-fashioned cookout at his new mansion. But this turns out to be more difficult than he expected, and his old friends and relatives clash with the sophisticated characters that have recently come into his life.